Your anger at the world does not make you holy. It is a distraction and a trap that keeps you from flowing in the love of God! It’s saps your strength; it short-circuits your power in Christ; it grieves the Holy Spirit and it dilutes and destroys your witness!

Yes, there is a lot of evil in the world and so many things are wrong. But God never called us to anger (toward people) and condemnation. Jesus did not come to condemn the world, but to save it:

“For God did not send his Son into the world to condemn the world, but in order that the world might be saved through him.” John 3:17. Without Christ, people are already condemned (John 3:18-19)

Our anger, grief and frustration should be turned toward prayer, intercession and pleading for God’s mercy…not His judgment. Listen to what Jesus told His disciples when the people of a Samaritan town rejected Him, simply because He was on His way to Jerusalem:

“…and He sent messengers on ahead of Him, and they went and entered a village of the Samaritans to make arrangements for Him. But they did not receive Him, because He was traveling toward Jerusalem. When His disciples James and John saw this, they said, “Lord, do You want us to command fire to come down from heaven and consume them?” But He turned and rebuked them, [and said, “You do not know what kind of spirit you are of; for the Son of Man did not come to destroy men’s lives, but to save them.”] And they went on to another village.” Luke 9:54-56 NASB

It is so easy to focus on everything that is wrong. I struggle myself! But when I read the word, and see how Jesus interacted with people, the lost, the righteous and the self-righteous, it does not line up with the way so many of us respond to unbelievers. While dying on the cross, in the face of haters, mockers, liars and thieves, Jesus cried out: “Father, forgive them; for they do not know what they are doing.” Luke 23:34 a.

I did not come to Christ until I was 30 years old. As I’ve said before, while I was raised to believe in God and Jesus, I was not saved. From about the age of 20 until 30, I was a professing atheist. I did not have the capability of following God’s ways, nor did I have any desire to because I did not have God’s spirit in me…

In His extreme mercy and love, He revealed Himself to me through the love of humble and gracious believers. They did not judge me or treat me like I felt I deserved, or how I was certain I would be treated by Christians. I did sense conviction, even though I did not know it was God at that time. But His loving conviction was not condemnation. I was not made to feel like worthless trash or that they were somehow better than me. I had felt the sting of religious people when I was growing up and wanted nothing to do with them. Unfortunately, people are the only example of God most of us have, so the question becomes: do we look like Jesus to the lost? Do we sound like love when we speak, for God IS love (1 John 4:7).

A final word on associating with unbelievers and believers, and it is from Paul:

“When I wrote to you before, I told you not to associate with people who indulge in sexual sin. But I wasn’t talking about unbelievers who indulge in sexual sin, or are greedy, or cheat people, or worship idols. You would have to leave this world to avoid people like that. I meant that you are not to associate with anyone who claims to be a believer yet indulges in sexual sin, or is greedy, or worships idols, or is abusive, or is a drunkard, or cheats people. Don’t even eat with such people.

Humble yourself before God and ask Him to fill you with His heart for the world…everything else will melt in His presence. 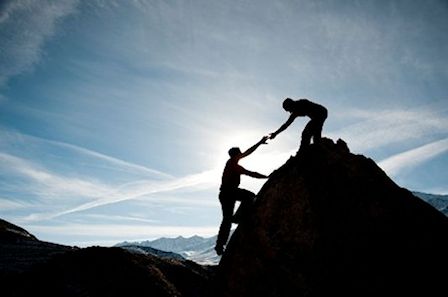